Solar Energy As A Way For Sustainable Energy 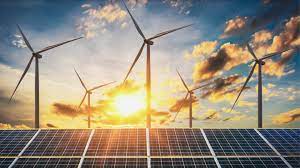 World׳s energy demand is growing fast because of population explosion and technological advancements which is something to worry about and a big concern for everyone on th planet. It is therefore important to go for a reliable, cost-effective, and everlasting renewable energy source for energy demand arising in the future. Solar energy, among other renewable sources of energy, is a promising and freely available energy source for managing long-term issues in an energy crisis. The solar energy panel work is done on all the building rooftops of Shivalik college as a sign of promoting an environment-friendly college with all the lush greenery it has sin its campus with also a project that was sent for a patent the previous year if a solar golf cart, and not only this Shivalik has all of its street lights powered by solar panels as well making it a completely eco-friendly campus with plastics banned in it.

The solar industry is developing steadily all over the world because of the high demand for energy while the major energy source, fossil fuel, is limited and other sources are expensive. Solar energy is the most widespread free-of-cost natural resource that is available l to humans and can be used up to a very large extent without the fear of pollution.

it is a clean source of energy that has seen a rise in its use and now is used for both commercial and household purposes and so it is very friendly and easy to use. Now even the government of the world is offering subsidies to people who are using clean and natural energy sources and that it can help the people cover the loss of pollution and the damage it has done to nature. It has become a tool to develop the economic status of developing countries and to sustain the lives of many underprivileged people as it is now cost-effective after long aggressive research is done to expedite its development. The solar industry would be the best option for future energy demand since it is superior in terms of availability, cost-effectiveness, accessibility, capacity, and efficiency compared to other renewable energy sources.

The future is of solar cells that is why Shivalik is now offering a specialization in solar energy to its students and that they can maximum benefit from it by opting for the same. This paper, therefore, discusses the need for the solar industry with its fundamental concepts, and the world energy scenario highlights research done to upgrade the solar industry, its potential applications, and barriers to a better solar industry in the future to resolve the energy crisis.

To outpace current solar cells, a new design would need to be able to capture more light, transform light energy to electricity more efficiently, and be less expensive to build than the current design so that the maximum benefit can be attained from it and also can be used widely without the cost of it getting high due to some complex design, the things have to be made better with also keeping in mind the fact that the cost has to a little low end for its household affordability in areas where there is little supply of electricity like mountains or far off city plains in rural like areas.

Energy producers and consumers are more likely to adopt solar power if the energy it produces is equally or less expensive than the other energy sources that are available, quite often it is seen that non-renewable, forms of electricity are used in areas where there is less supply of electric, so any improvement to current solar cell designs must bring down overall costs to become widely used and for the people to use on an affordable cost. The first option, adding hardware that allows the solar cells to capture more light, does not require that we abandon current solar cell designs. Electronics can be installed with the solar cell that let the cell track the sun as it moves through the daytime sky. If the solar cell is always pointing at the sun, it will be hit by many more photons than if it was only pointing towards the sun around midday.

Over the past 20 years, the costs associated with solar cells, the structures capable of converting light energy into electricity, have been steadily decreasing pointing to the fact that it is now being adopted by people all over the globe at a better rate.